Category: leather
Home / leather /
It may not be as cold in Miami as every other location in the world right now, but there’s one thing that’s true all across the board…it’s the weekend!  Therefore, I’m teaming up with Lyst to share my “Lust List” of weekend-inspired attire for three occasions.  If you aren’t familiar with Lyst, it’s ultimately a wonderland of every possible fashion piece imaginable, and it allows you to create photographic lists of your favorite items.  It really helps me style my looks with ease, as I can just drag and drop items to see how they look together.  I like how I can navigate through the site easily, and pair pieces together as if I’m in a virtual closet.  Lyst also suggests particular styles that it believes coincide with my personal style, which is great because it saves me the time of searching for new pieces!
For a night out on the town, I wanted to put together a twist on the typical “little black dress” and give it some edge.  The Gucci Aristographic Plexiglass Evening Clutch and Giuseppe heels add a little glamour as well.  As for a Saturday shopping trip, it’s all about edgy comfort.  When I’m shopping, I love a good embellished boot and leather pants or jacket.  Sunday Brunch is a must, so I paired neutral tones for a sexy-chic look.
(click on each to see where to shop these items)
Friday Night Out
Saturday Shopping Trip
Sunday Brunch 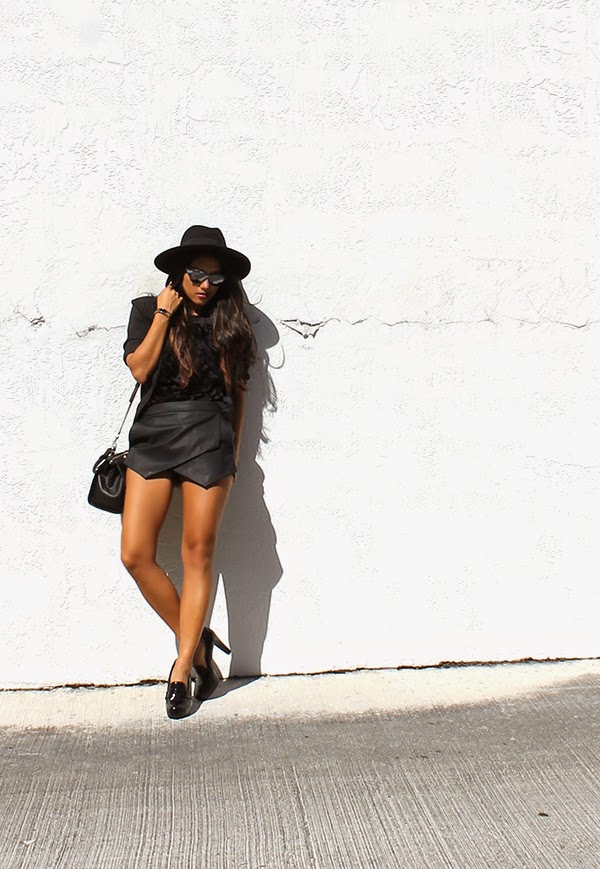 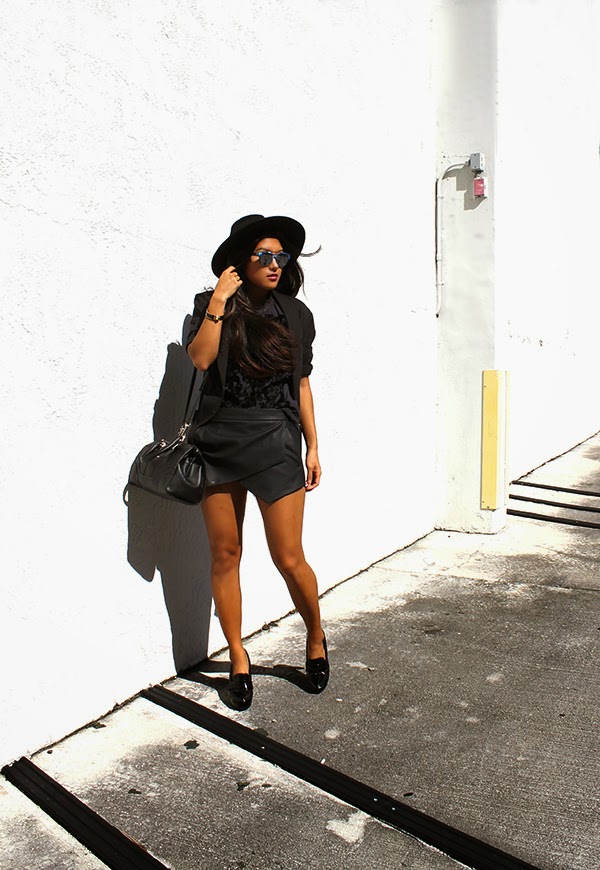 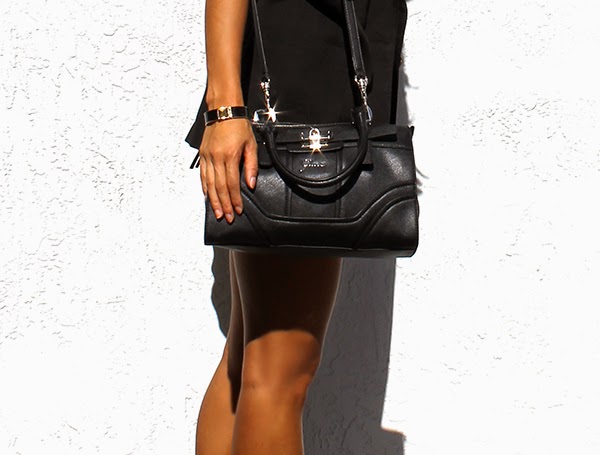 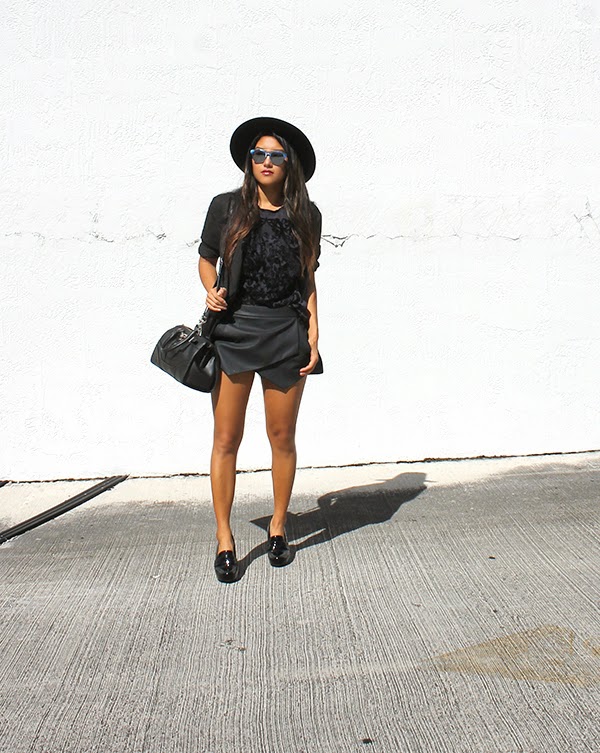 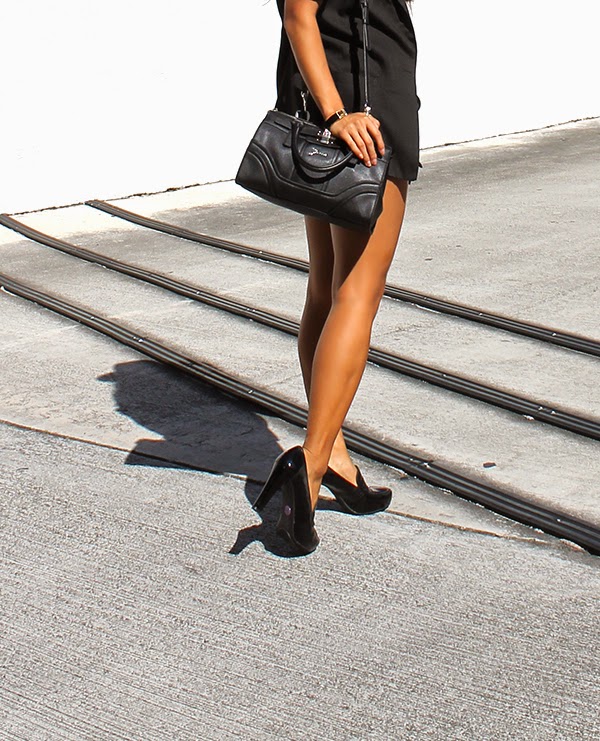 Oddly enough, I’m sitting at my laptop, with a pile full of Trader Joe’s Dark Chocolate Speculoos Cookie Butter Cups as I blog my life away at 1:04 A.M.  Obviously, what else would one be doing at such a time?  Cyber family – I have come to a realization that I failed to post anything in almost a week, which is highly unlike me.  Although I would like to place the blame on my presence at home, visiting family.  Yes, that sounds like a good excuse.  I’ve also taken on the role of posting a new video every day of December on my video channel, which seemingly takes up more time than expected when I initially had this grand idea in my head.  Nonetheless, I like to stick to my word so I shall push forward.
As I sit in the 40 degree weather, enjoying the 10 degree increase since the past week, I recall this look that I shot back in Miami prior to traveling up here.  If you grew up in the 90’s, this dandy little wonder called a skort, was all the rage.  What could possibly be better than a skirt that ultimately remains shorts?  This skirt trick has a sexy edge without looking ridiculously crazy.
What I’m rocking:
Top by ZARA
Blazer by Macy’s
Skort by EXPRESS
Shoes by Me Too
Bracelet by Kate Spade ℅ Nordstrom
Hat ℅ ASOS
Bag ℅ GUESS
Sunglasses ℅ Italia Independent
Get the look:
More J.Crew… 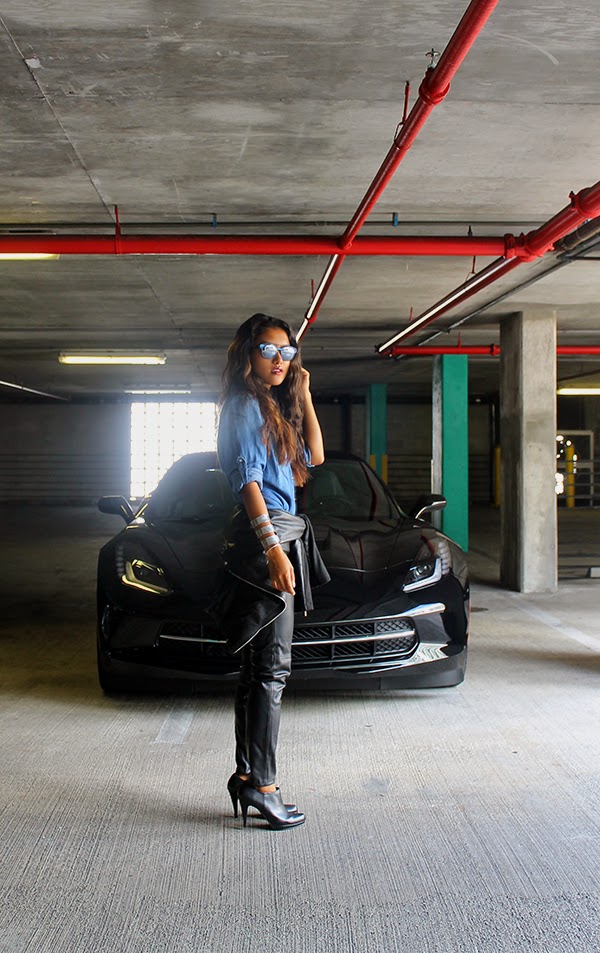 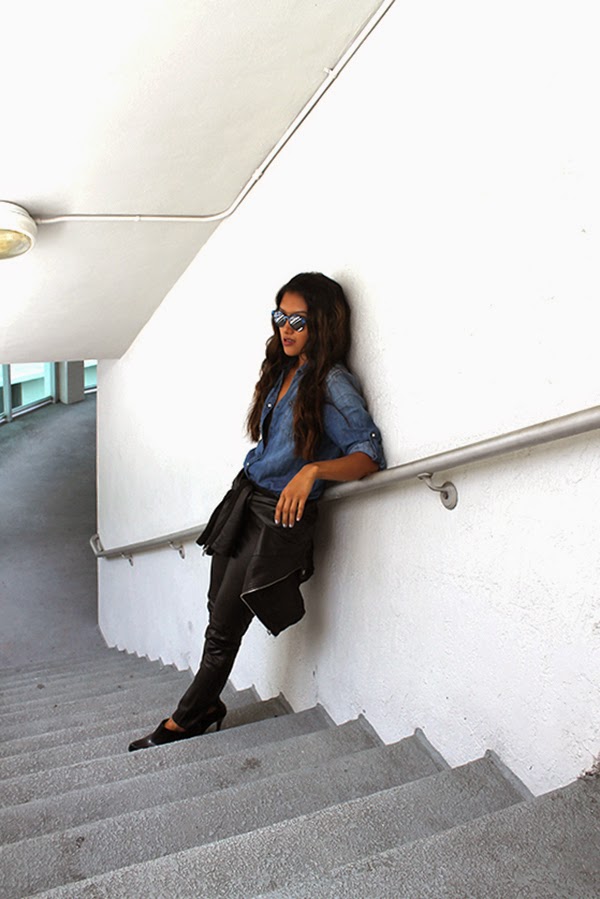 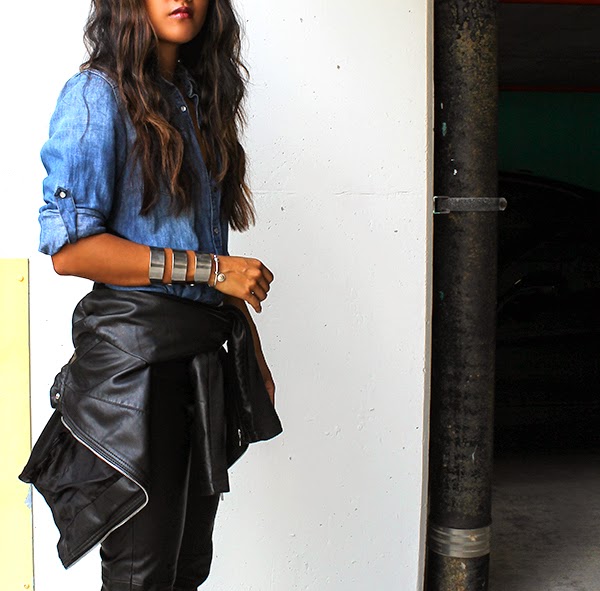 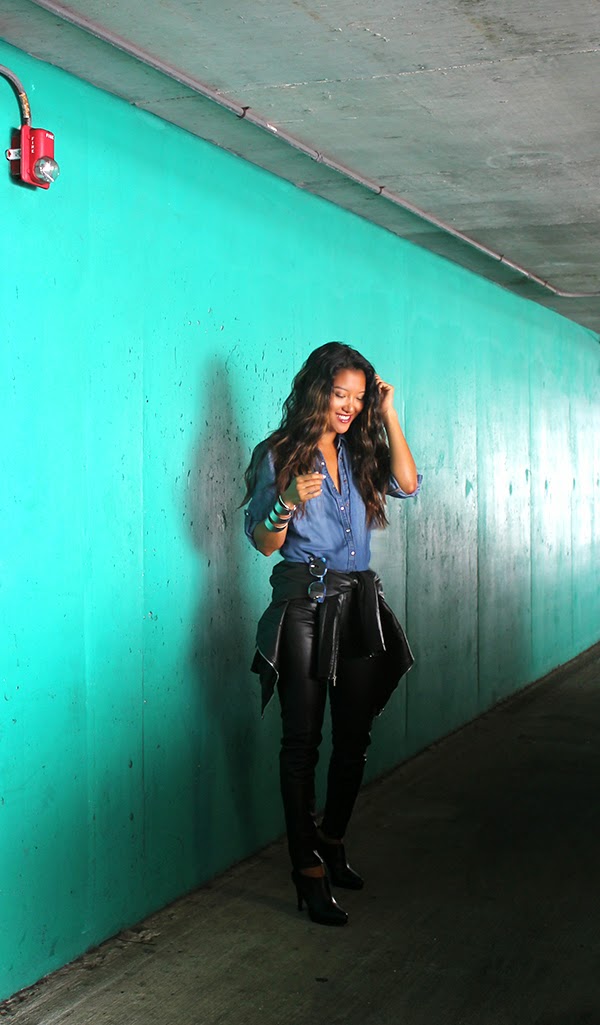 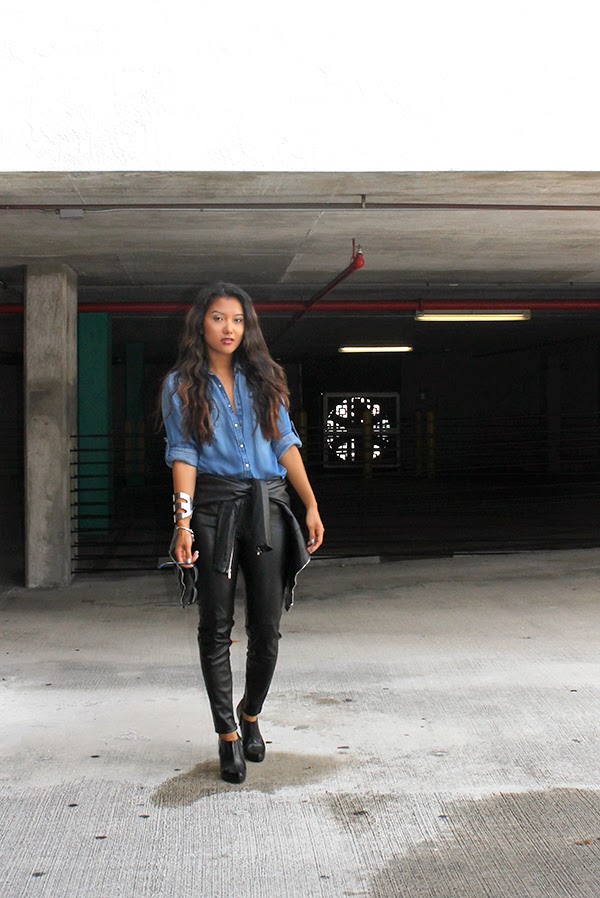 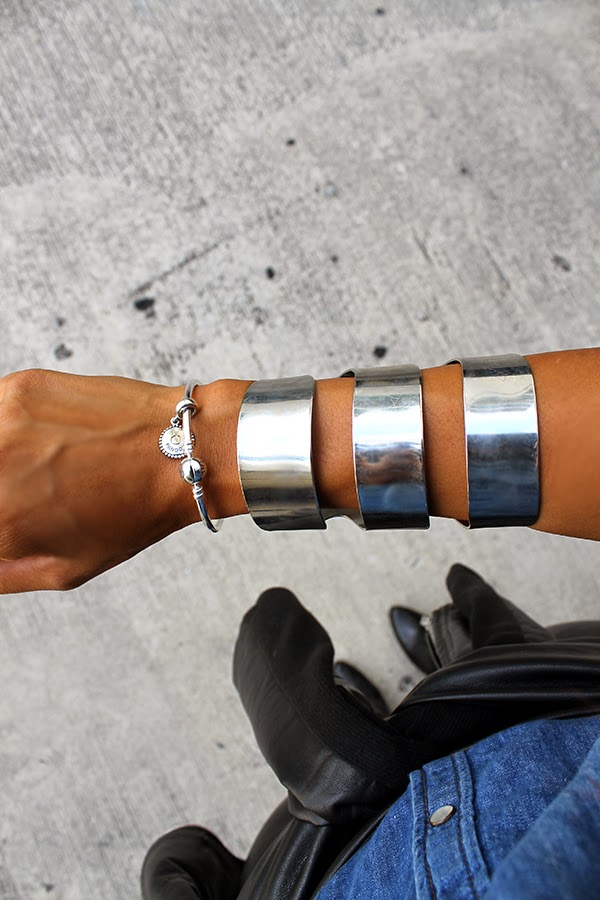 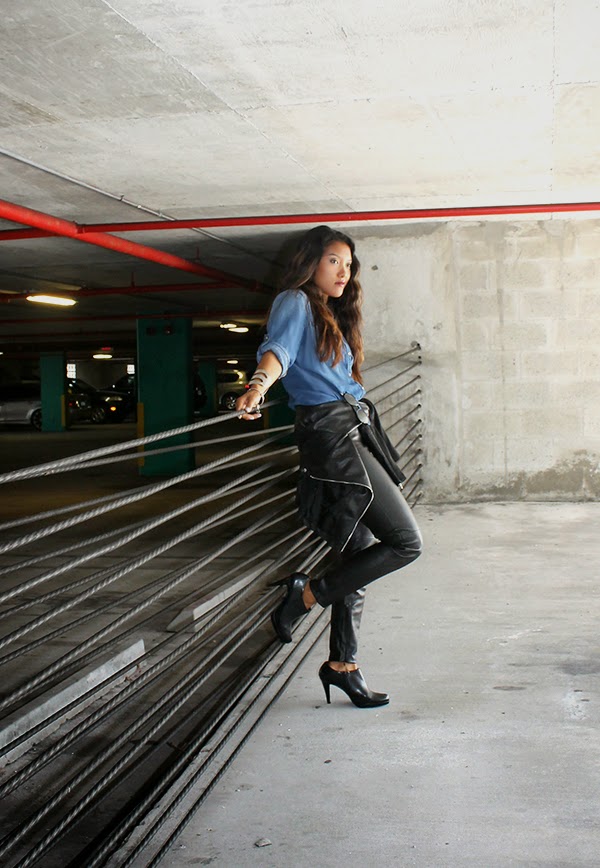 Upon careful consideration of Fall/Winter wardrobe staple apparel pieces, denim and leather have seemingly fallen into place.  Also known as the “new classics,” denim and leather pair perfectly well together for a sexy and edgy look.  The force behind styling a ready-to-wear street look is to select garments and change the traditional way of wearing them drastically.  Instead of a thick denim shirt with casual jeans, lightweight chambray button-ups, or leather overlays and ankle booties to show a peek of that ankle cleavage (is that even a fashion term?).
Whatever you do, add some standout accessories to polish it off and boom – biker chic just happened.
What I’m rocking:
Shirt ℅ Mavi
Pants by ZARA (similar style here)
Jacket by EXPRESS
Bracelet ℅ Pandora
Cuff by EXPRESS (similar style here)
Booties by Steve Madden (similar style here)
Sunglasses ℅ Italia Independent (similar style here)

Hey guys.  If you watched my recent haul on my YouTube channel then you will recognize this gorgeous top that I styled in today’s outfit of the day.  Not only is it comfortable, but it’s so chic and beautiful.  I decided to give it a bit of an edge by pairing it with some leather shorts and polish it up with a brocade printed blazer.  I wore this to a new restaurant opening here in Miami and it’s the perfect dressy yet casual look if you ask me.  It’s not too much, not too less. 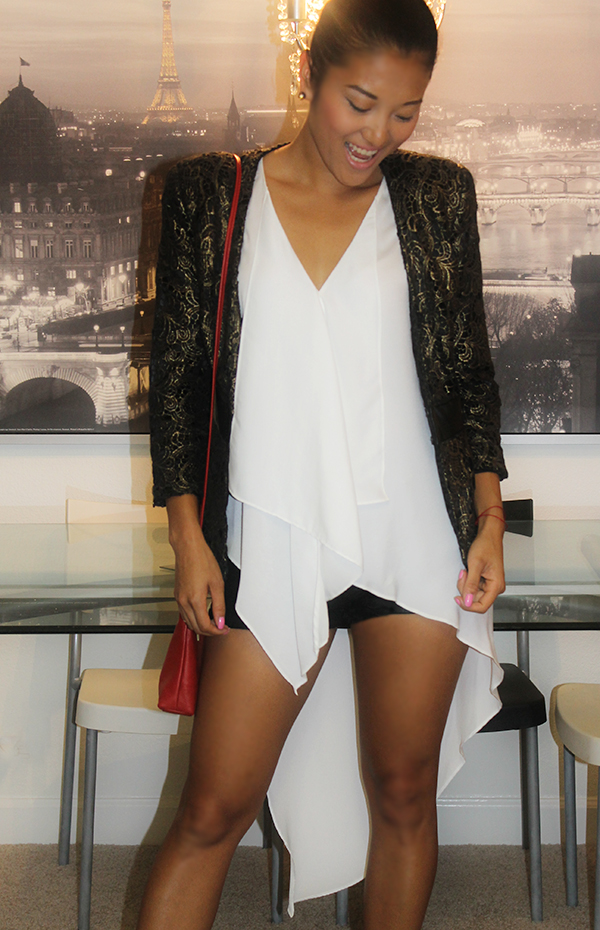 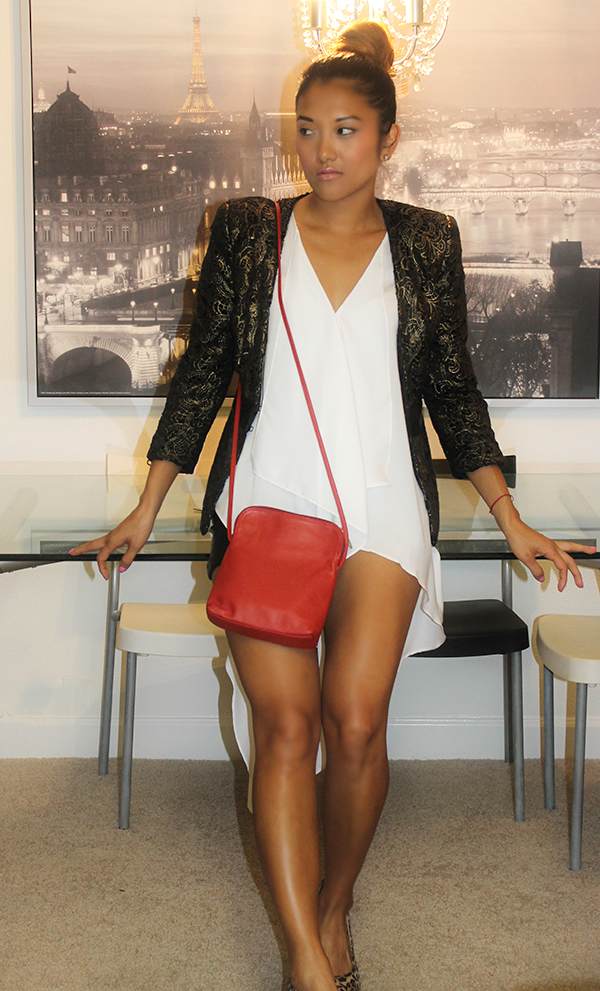 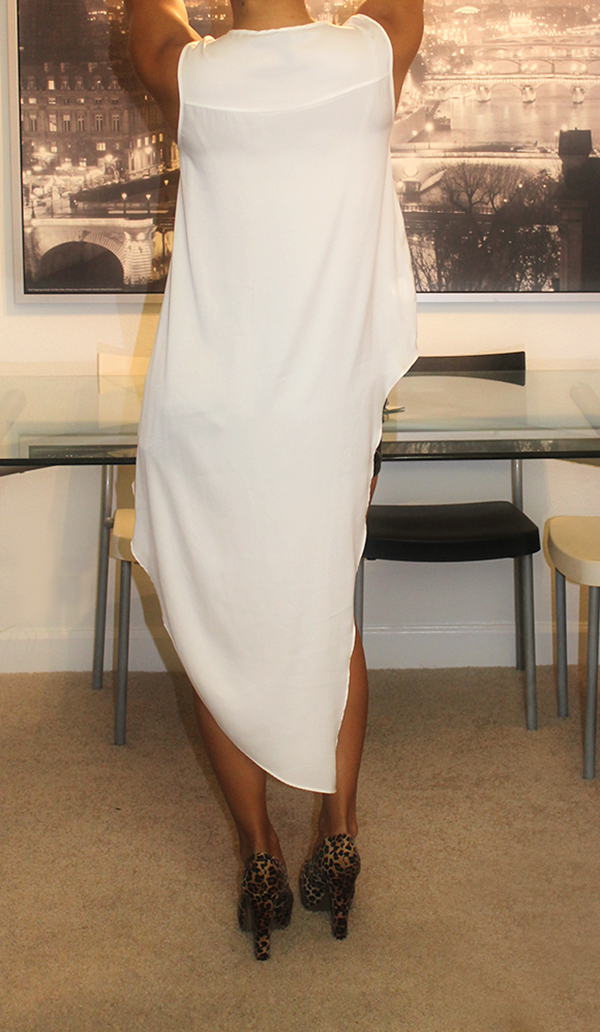 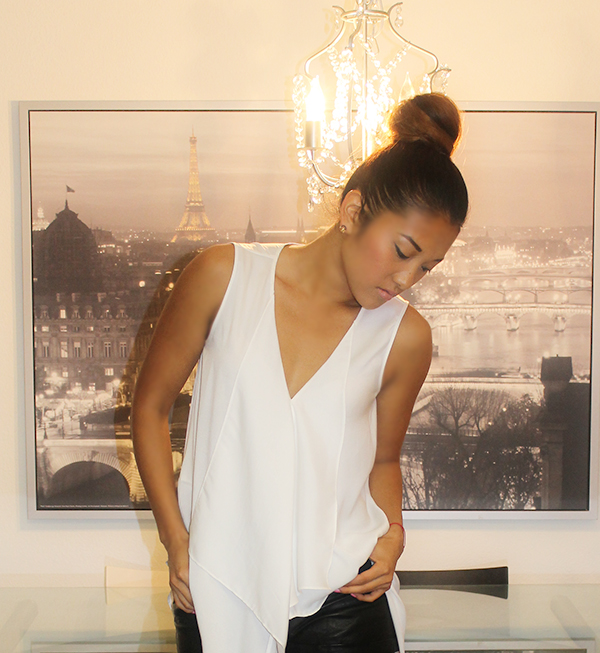 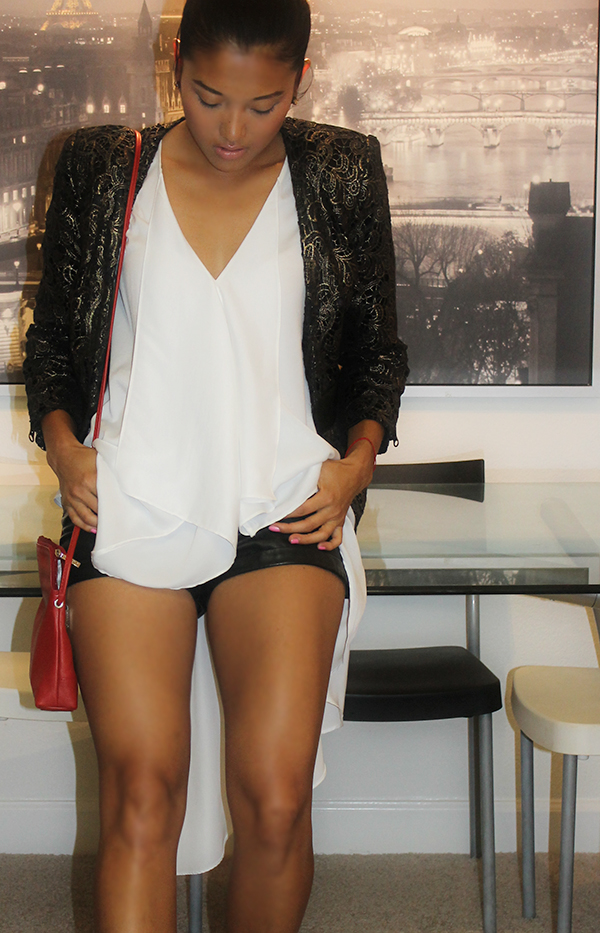 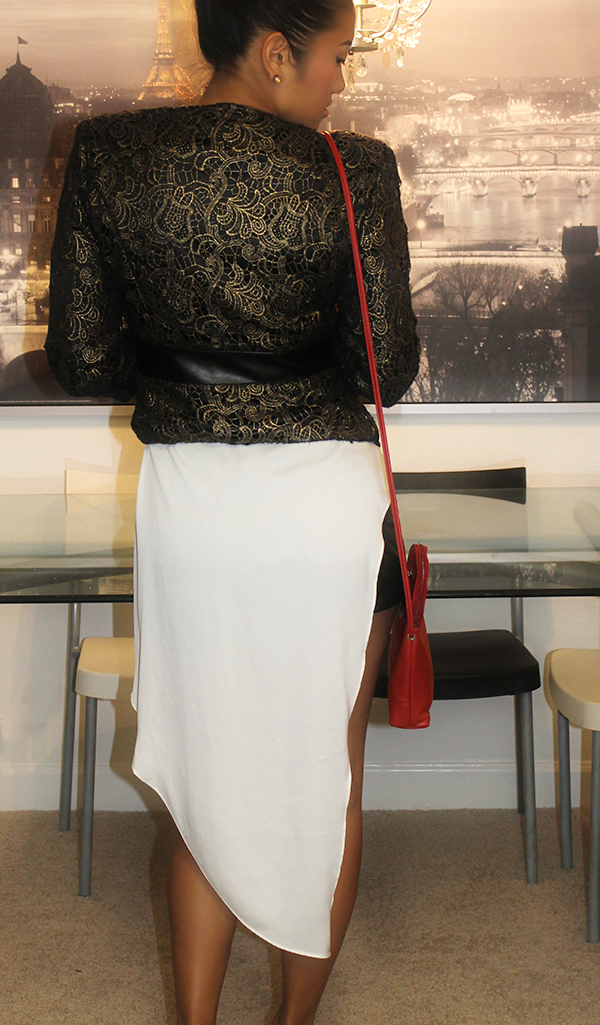 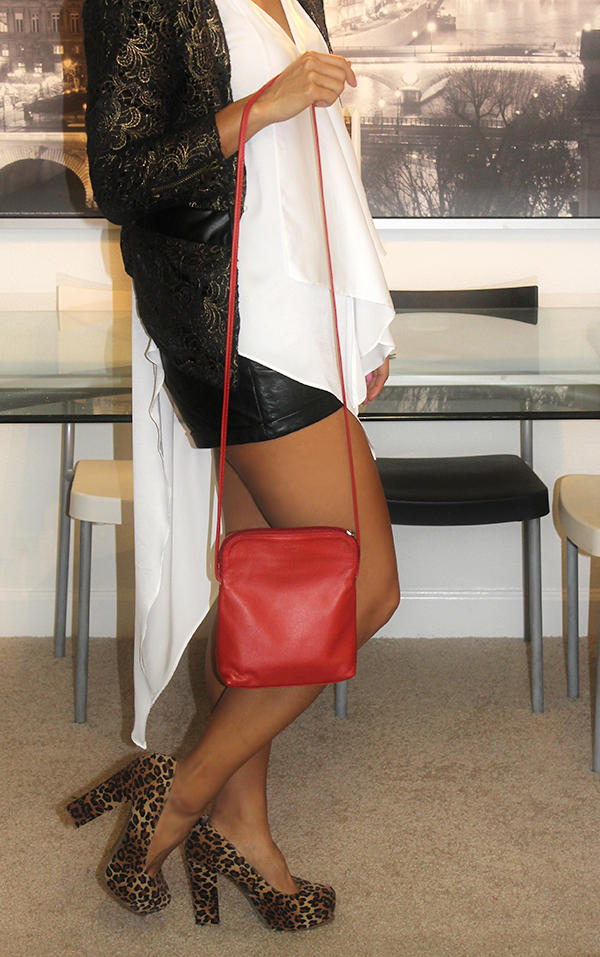 I wanted to start off the week with a bit more casual look, so today’s post features this loose-fitting tank, a leather jacket, and some DIY denim shorts that I created.  This weekend was pretty busy for me since my mother came into town to see my baby boy and myself (although I’m sure she only comes to spoil him and I just so happen to reside in the same place), but it was a great time.  I love spending time with my family because they keep me grounded.  Anyway, I have a lot of new home decor items that I can’t wait to show you guys in a later post!  Lately, I’ve been revamping the decor in my place and I’m excited for you to see the finished look.

What I’m wearing:
Express leather jacket
Lakers tank
DIY custom shorts (I cut some old jeans up and added my own touch by piecing studs and leather on them with splashes of bleach) 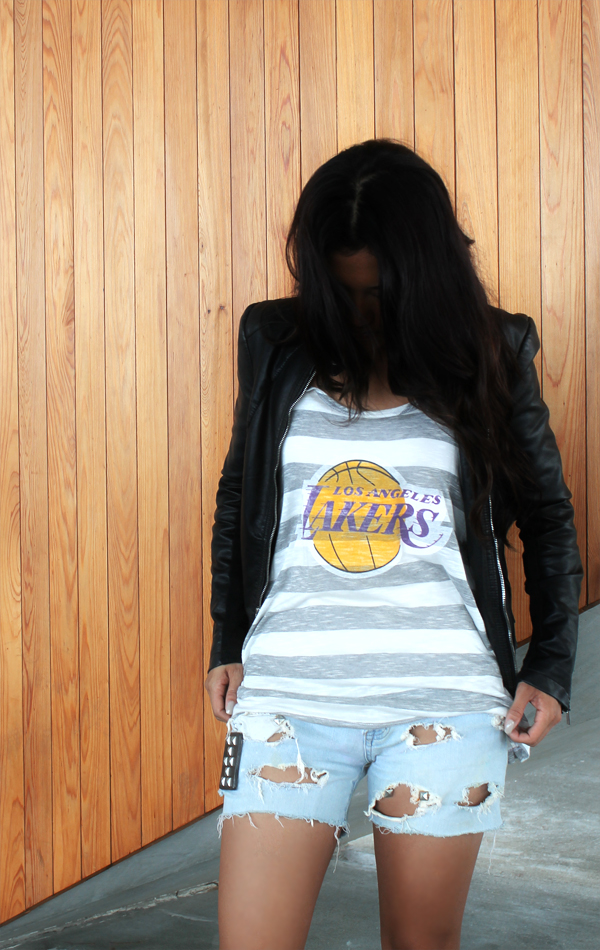 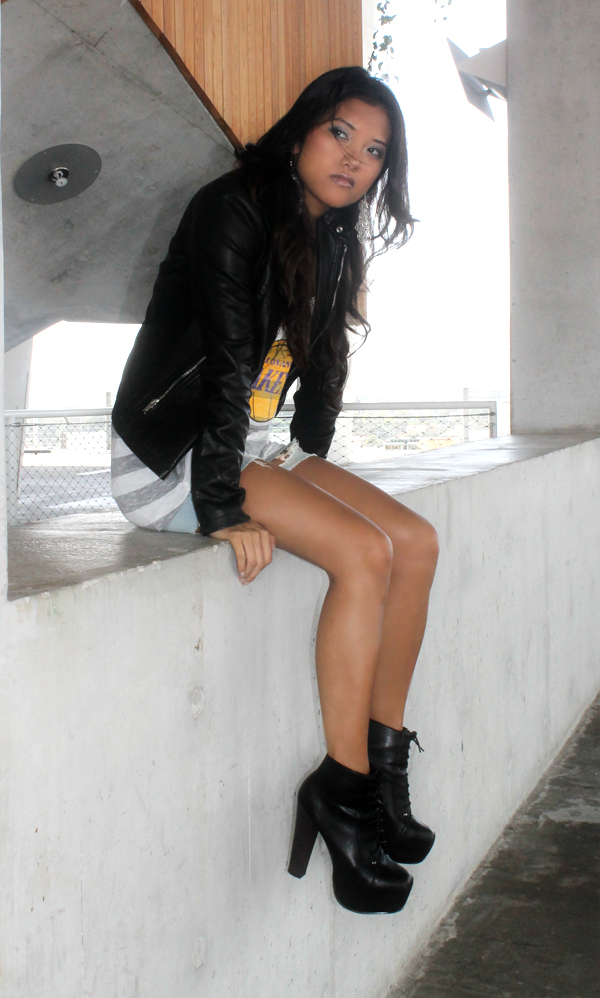 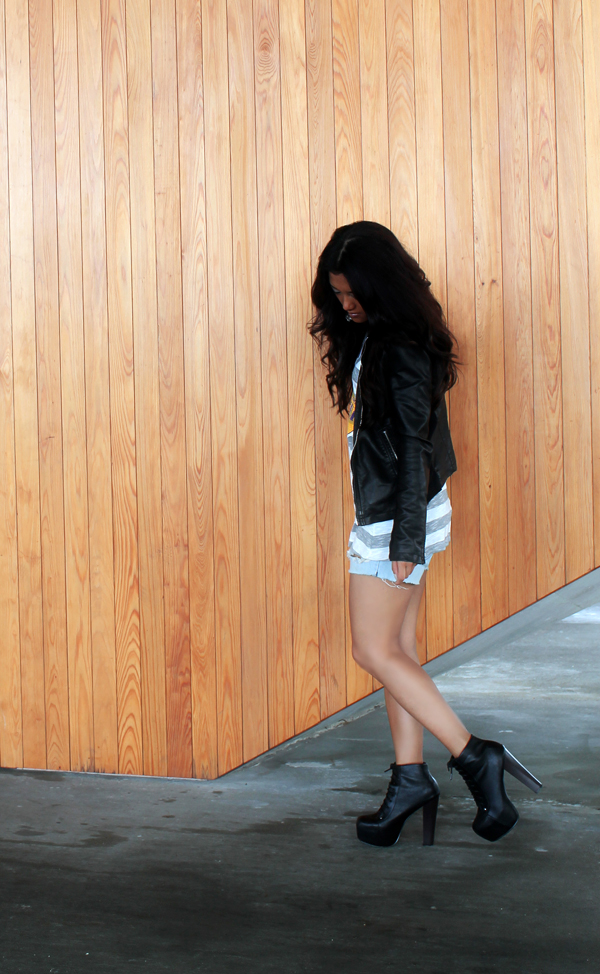 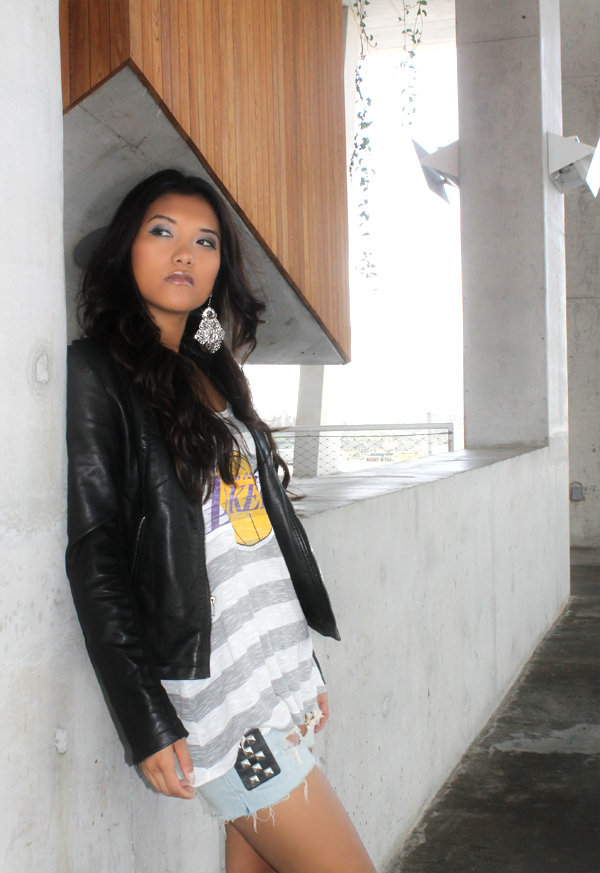 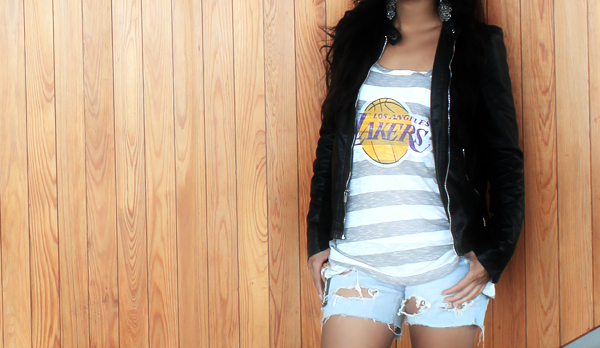 “It’s not who you are that holds you back, it’s who you think you’re not.  So start believing in yourself!”

It’s motivational Monday and I just wanted to start off the week with one of my favorite quotes.  I hope everyone had an enjoyable weekend!  I’ve been a little sick lately, along with my baby Taejin.  However, I had a relaxing weekend.  For today’s OOTD, I’ve put together a mix of a very feminine look combined with a leather jacket and black booties to add a bit of an edge to it.  It gives a unique approach to your average feminine outfit.  Enjoy =] 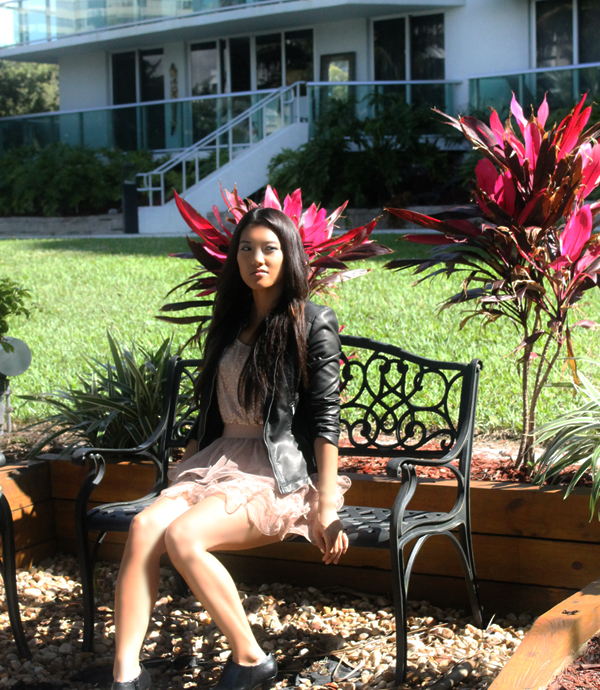 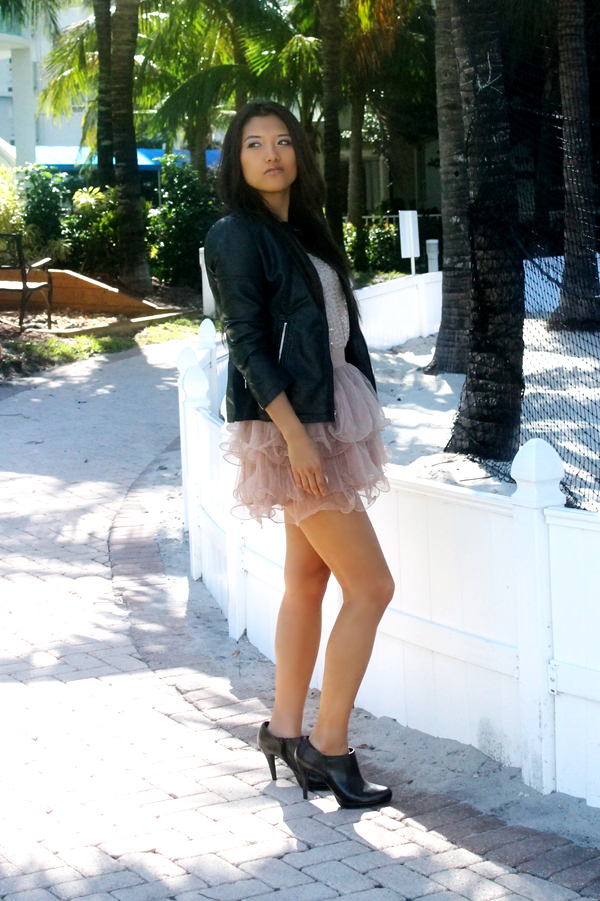 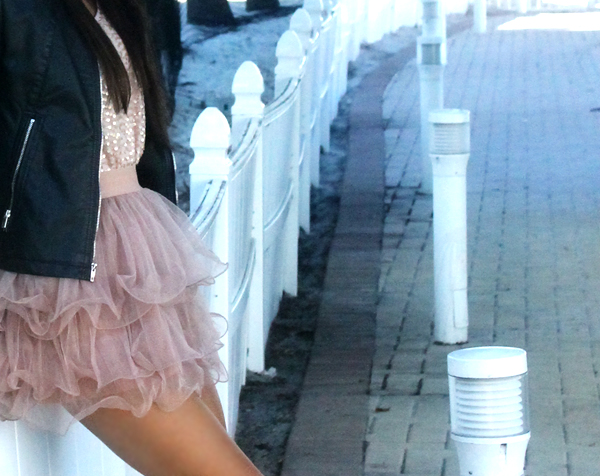 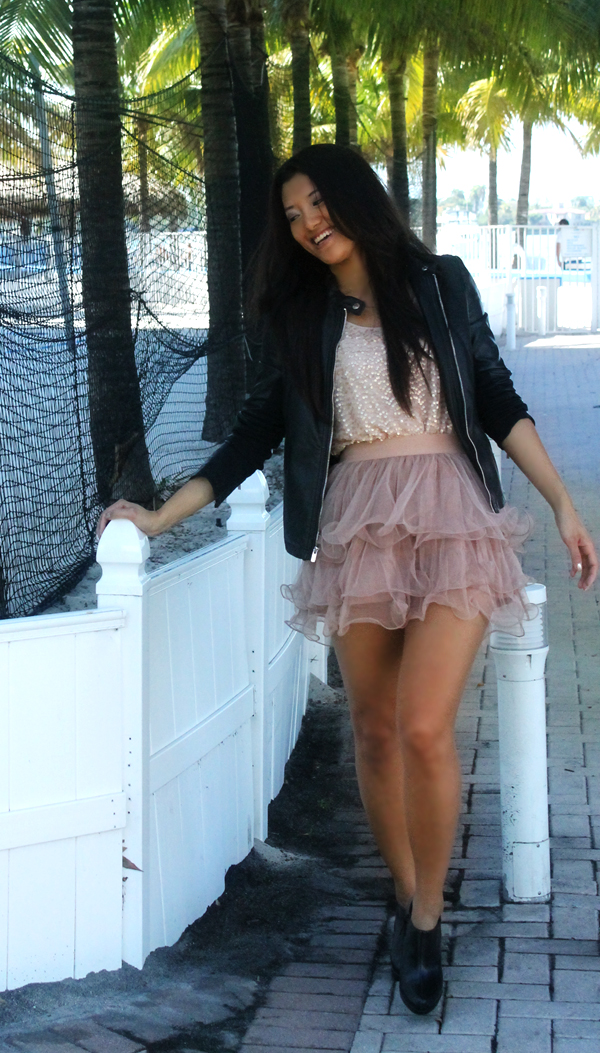 Happy Friday everyone!  For today’s Friday Favorites, I’ve compiled together some of my top 5 trends for the upcoming season.  Spring is such a beautiful season because the weather is amazing and it allows you to bring out some of your lighter and brighter pieces.  What are some of your favorite trends for the season?

Here are some of my favorite trends: